I realised after all my planning and agonising over Lego storage before Christmas, I didn't actually report back with what I had done. It wasn't as grand a solution as I had envisaged, but it is very effective and has stood the test the time. It works really well and has eradicated the random piles of Lego everywhere.

Both my boys are into Lego in a big way, particularly my 9 year old. He needed space to store Lego and more building space as his city was expanding at a rapid rate. It is basically 3 x plastic wheely drawer things, with some clear plastic boxes for smaller things like heads and weapons; with some MDF on top as a building platform. I think it cost about £30 in total. Where the love came in was me sorting boxes (5 x storage tubs) into sizes and pieces. Hours... and ... hours... of.... bloody.... Lego..... sorting. It was worth it though as it is much faster to build things, and I my belief that colour sorting is more for parents-who-like-things-to-look-tidy, rather than for the children who actually use the stuff. 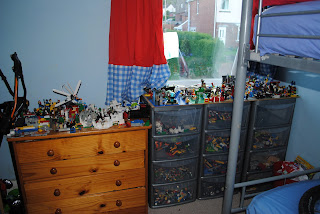 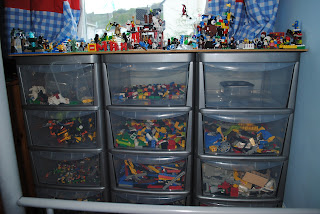 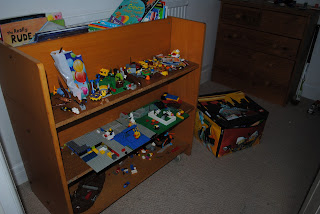 The bottom picture is my 4 year old's room. He has recently been moved into his own room, so just has a generic Lego box, with some shelves. Actually, I love these shelves. They need painting, but they were only £5.50 from eBay. They were from a school and have castors, so can swing around so he can access all 6 shelves, instead of needing someone to reach things down from top shelves for him. His room is quite small and it's handy that they are mobile.

So, there we have it - our Lego storage solution. It's not as glamorous or pretty as some other blogs I have seen, but it's incredibly practical and suits their needs perfectly.
Posted by Unknown at 18:12

Comments
Things That Have Caught My Eye

Promote your Page too